China and America's worsening relationship and what it means for business 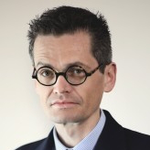 Beijing bureau chief and Chaguan columnist at The Economist

David Rennie joined The Economist in 2007 as European Union correspondent and Charlemagne columnist, based in Brussels. From July 2010 to July 2012 he was British political editor and author of the Bagehot column, based in London. In the summer of 2012 he moved to Washington DC. He was Lexington columnist 2012-17, and Washington bureau chief 2013-2018. In May 2018 he moved to China as Beijing bureau chief and launched the Chaguan column on China in September 2018. Previously he was on the foreign staff of the Daily Telegraph, with postings in Sydney (1998), Beijing (1998 to 2002), Washington DC (2002-05) and Brussels (2005-07). From 2006 until he joined The Economist, he was also a contributing editor of the Spectator magazine. He worked for the Daily Telegraph in London (1996-98), and the Evening Standard (1992-96). He has given classes and public lectures on EU affairs at the universities of Harvard and Boston in America, Bristol University in Britain and at the business schools ESCP (Paris) and IE (Madrid). He won the 2010 UACES/Thomson Reuters “Reporting Europe” award. He is a frequent guest on radio and television news programmes.