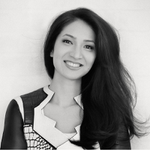 Founder and Designer of Ong Shunmugam

Priscilla Shunmugam is the founder and designer of Ong Shunmugam, a contemporary womenswear label, which she started in pursuit of wanting to define Asian culture and its centuries of craftsmanship and creativity. Since its inception in 2010, Ong Shunmugam has focused on crafting designs that weave traditional textile techniques, colours and silhouettes to put a contemporary spin on clothing such as Cheongsam, Samfu, Sari and the Kebaya.
Priscilla’s work has been showcased at the National Museum of Singapore, Paris fashion week and the Grey Goose Guild. She has been invited to present her colletions on the modern cheongsam at the National Museum of Singapore, New York’s Museum of Chinese in America, and Beijing’s Museum of Women and Children in China. She is a regular on the speaking and judging circuit in the Asian design community.
Priscilla has had no formal design training and relies on instinct, logic and analysis. She read law at the National University of Singapore. In 2008 she spent a year in England studying dressmaking and pattern-cutting before establishing Ong Shunmugam. 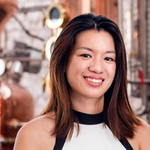 Jamie Koh is the founder and managing director of Brass Lion Distillery, Singapore’s first micro-distillery producing specialising in producing high-quality small batch craft spirits. Inspired by the flourishing spice trade that made Singapore a trading hub in the 19th century, Brass Lion Distillery uses familiar Southeast Asian botanicals to create distinctive spirit creations that reflect Singapore’s heritage as a cultural melting pot. In addition to being a distillery, it is also home to a tasting room, R&D lab, retail space and herb garden.
Jamie has 10 years of experience in the food and beverage industry. She is also the founder of two other bars in Singapore, Chupitos Shots Bar and The Beast Southern Kitchen and Bourbon Bar.